Kale, Kale, The Gang's All Here 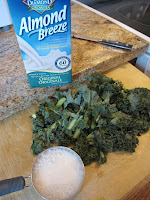 Earlier this week, I ventured out to visit an MD whose practice is based on nutritional sciences. It was an interesting visit and a mixture of the allopathic world meeting nutrition. One of the tests that the doctor carried out was measuring the amount of phytochemicals in my body. Anything above 70,000 was considered excellent. So, as I put my hand over the machine (it seemed very Star Wars to me), you could see the machine recording. I was rooting for the kale measure in my body to put me into the Olympic Zone. I was hoping for a gold medal.

Finally, the machine finishes measuring, and I score a 75,000! What it said to me was that K-A-L-E, one of the richest nutrient dense foods was doing its "thang." Kale has gotten a bad rap, for years, it was a garnish, along with a wedge of fresh pineapple, say, on a deli platter. And, now, it has the premiere spot on my dish, the spotlight, the center stage. My new favorite food. I mix it in salads, put it into everything, even put it in my oatmeal! And, I love it.

Perhaps you are new to kale. And a great way to "get into it" is to shake your groove thing and make a Kale Shake. Here are two (2) different types of Kale Shakes...try them both.

By the way, the easiest way to make your shake portable is to use an old 32 ounce glass jar. You recycle, reuse, and the shake just seems to taste better in glass. Really.

I keep bananas in the freezer so that when I make them into a shake, a thickness is created from the frozen banana. Just throw everything into your blender, and blend until the kale is almost invisible. You'll have a beautiful and healthy green shake.

Four ounces, each, of Carrot and Orange Juices
1/2 frozen banana
One cup of kale (any kind)

Throw everything into your blender. Blend until super smooth. This is VERY refreshing.

Tip of the Day: It's easier to smile and say "yes" to someone, even if you do not agree with them. Saves loads of energy, and you'll feel better, really. Go eat some Kale!