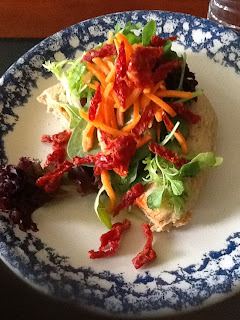 When I was a little girl, my family and I lived atop my grandparents' Italian restaurant. It was called Luigi's...which was my grandfather's name. At the height of his career, he was about the age that I am now. He was an amazing chef, and most well-known for his pizza.


I'd like to think that when other four year olds were mingling in nursery school, my sandbox was Luigi's. I learned to set a banquet table when I was a pre-schooler's age. And, I used to love and watch Grandpa make his pizzas.

So much of who I am stems from those early years at Luigi's Restaurant...my love of food and people, and my ability to cook without cookbooks.  I invent things all the time, and never make the same thing the same way twice, ever.  Luigi's was my grandfather's restaurant.  And, we lived on the second floor.

Luigi's was my sandbox, so to speak.  When other pre-schoolers were hanging with Miss Francis from Ding-Dong School, I was using Luigi's as my play area.  It's where I learned to set a banquet table, run orders, fold napkins, and greet guests.  It's also where I loved to watch my Grandfather make pizza, lots of it, too!

As a low-fat vegan, you can never go wrong with pizza.  A few years ago on a trip to Rome, I was impressed with the thin and bubbly crust used in their pizza presentation.  As I read more about pizza, you can go to Naples and find that they make a "pie" as my Grandfather used to call them, and simply put a marinara sauce on top, then bake it.  When it comes out of the oven...you throw a salad on top...and presto, you have a nice "pizza pie."

In my plant-strong, low-fat vegan world here's what you can do to create a healthy pizza.  I make a whole wheat dough (I fiddle with it, so don't ask for a recipe), and somehow, it comes out nicely.  Sprinke a generous amount of your favorite low-fat tomato sauce...and cook it on a pizza stone.  I usually throw some corn meal on the bottom of the dough...adds authenticity to the crust.  You can also use Ezekiel tortillas, they make an awesome pizza base!

When the pizza comes out of the oven, I throw a big tossed salad on top, and without adding oil, enjoy a magnificient creation of delicious-ness.  You won't miss any cheese, meat, or anything, because this is just plain delicious, clean eating.

I do not use Daiya cheeses...they are laiden with oil.  I may as well drink a cup of oil instead of using the Daiya.  You don't need the "fake" cheese.

Nothing fake here, only delicious pizza that makes me think of Luigi Montaruli, who was a real stand-up guy.