Plant-Based at the Museum 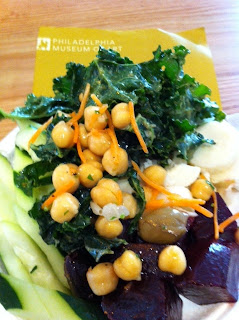 Philadelphia is a rather amazing city.  There's always something to do.  And with such great museums in the offering, you can never tire of something to do.  On the first Sunday of each month, you can head to the majestic Philadelphia Museum of Art for a fun day of beautiful art with free admission.  And, if you are a people watcher like I am, well, it is almost like a double-header.

Today, though, I forgot to eat lunch, simply forgot.  And while we were touring the exhibits, hunger called, so we took a turn into the cafeteria.  My hopes weren't too high, and I wasn't sure what to expect. But, wow, much like looking at a work of Thomas Eakins, I was in awe of the salad bar.  Jicama. Spring Mix. Palm Hearts.  And listen to this, KALE!  The kale had some kind of dressing on it, so I asked the attendant if it was possible to get some "plain kale."  With some garbanzo beans sprinkled on top, this beet-centric salad made my day.

There was a time in vegan history when a visit to a salad bar had lackluster selections and it was only filled with tomatoes and  iceberg lettuce.  For every vegan/plant-based eater I know, I think you have all made a differnce in the expansion of healthy choices for those of us who choose to not have mayonnaise laiden salads and cold-cuts.  It was so refreshing to see such healthy and green choices for my lunch.

After I finished my bountiful salad, I made it a point to go and talk to the chef (this was a real, upscale cafeteria, because the chefs were wearing real chef hats) . I thanked him for his delicious, clean, and neatly maintained salad bar.  It was well marked, ingredients list ever-present.  It was a fun and easy outing for this plant-strong eater.

From airports, train stations, and museums, it is getting easier to be a whole foods vegan.  My day was great and it was made simpler by the cafeteria staff at the Philadelphia Museum of Art.

Yo, pass me the kale.  And after that, get back on the museum path for a fun afternoon of learning about American made glass.
Posted by Unknown at 7:34 PM