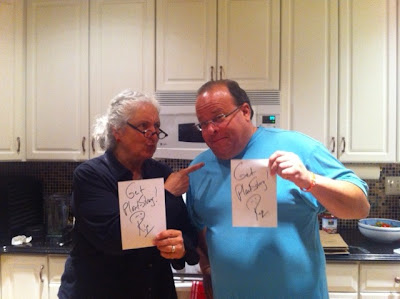 Call it fate. Call it Kismet. Sometimes there are people who you are supposed to meet. And, they plop in your lives at the most unsuspecting times. And I was meant to meet Jon Ostroff, Esq.

A few weeks ago, I saw a post on Rip Esselstyn's wall from a woman named Amy Saler Ostroff. She asked Rip to support her husband in his quest to become plant-strong. Rip, in turn, asked his E2 followers to lend some support to Jonny O.

Jonny O. started a blog called, "Jonny O Goes Vegan." It was a pictorial countdown of his days as a carnivore. I started reading the blog and was amused by Jon's wit, but inside, a part of me was aching for Jonny. Because Jonny was caught in a tangled web of bad eating. Having escaped that same winding and destructive path, I was really pulling for Jonny O., who at the time, was "my friend whom I hadn't yet met."

In the corner of my mind, I remembered seeing Jonny and Amy at the May 19 premiere of Forks Over Knives. I also remember him getting his picture taken with Rip. And I remember thinking to myself, "Oh, I would love for this guy come to the plant strong side of life."

I posted to Jon's wall, you know, just a friendly "holla." Well, a few weeks ago on a Friday, I got a call from Jonny O. who was traveling the globe and visiting every restaurant on the eastern seaboard. He was having a swan song with meat and captured every moment through pictures. The funny thing was that, just as he had called me, a Whole Foods Market truck passed him on I-95. It was as though central casting sent the truck as a "sign." During our chat, I was touched by his humor and wit. But even with all of his "hardy-har-hars," I knew that he wanted to escape from bad eating and join us the Engine 2 way of life. In my heart, I felt as though bad eating had consumed his life, and he was done with feeling horrible. I knew that, because Jonny O. and I walk the same walk.

I met Jonny O. on August 1. I drove to his house in a thunder storm. My car was loaded with plant strong groceries. I got to his home and was greeted by Amy his wife, who is a life long vegetarian. They ooze love for one another. Amy and I unpacked the car and my plan was to make a few "E2 Basics" for them. I always LOVE showing people just how delicious plants can taste. And, Rip's lasagna is always a treat, and that was on the menu for my hands-on cooking demo. Dinner was "Raise the Roof" lasagna, a hearty salad with Casa de Luz dressing. Dessert was Spinach Sorbetto. Jonny's eyes were crossed in confusion when I mixed grapes with spinach, but he loved what he ate. I scribed the dinner in its finale as a "romantic, plant strong dinner for two."

Meeting Jonny O.? There are no words to describe Jonny O. He is larger than life. Perceptive. Very witty and funny. But, also very serious. Serious about his goals. He has set the plant strong world on fire. He is truthful. I wait for his daily blog posts. He has a posse of 12 who has joined his crusade, I am one. I live E2 everyday of my life, but being with the "Vegan Wagon" has me committed to more gym, getting more sleep, and taking my lunch to work everyday (this is part of a money-saving crusade I am presently on to reserve funds for a Vespa, a sea foam green on at that [another story, another time.]).

Jonny O. is the real deal. He can talk about farts and make you laugh, but on a deeper side, I can feel him moving to the plant strong side of life beyond his 28 day prescription. And that puts a smile on my face. When I visited that afternoon, Jonny O. was Skyping with Rip. It was fun being a fly on the wall. The whole time, I was pulling for Jonny O., because saying good bye to bad food, well, it is like the Gladys Knight song, "Neither one of us wants to be the first to say good bye."

So, if you want to read a little of Jonny O., and believe me, he will make you laugh, get to his blog. He will also make you think deeply into the bowels of your heart. This is a nice man. A funny man who is reaching out for change, and at the same time, to lend support to others.

In the voice of Ed McMahon, I say to you, "Hereeeeeeeeeeeeee's Jonnnnnnnnny."