Passing On Your Left... 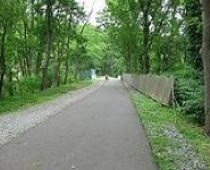 It was 95 degrees out today. I am not a fan of heat, humidity, sweating, and pounding sun. Yet, I found myself motivated to hit the Betzwood Trail for a good, flat, fast workout.

The Betzwood Trail is located in Valley Forge, and what I love most about it is the beautiful canopy that protects the sizzling sun from making it even hotter. Today, I was jamming with Earth, Wind, and Fire and Stevie Wonder and we were having fun. The path was loaded with all sorts of people from the serious cyclist (the ones who yell, PASSING ON YOUR LEFT) to leisurely strollers who can't tell the difference between your right and their left. In my head, I am streaming like a gazelle, but the reality is that I am only walking a 14 minute mile. But, I am still moving along at a clip.

Things race through my mind when I walk. Like, today I was wondering how I escaped being the morbidly obese woman who shops at Lane Bryant wearing pastel pink with matching sandals. Or, how I darted the bullet from heart disease and diabetes. As the gentle breeze on the trail made the leaves twist, I thought about the morbidly obese woman who I had seen earlier in the day on the electric scooter at Target. Her basket with filled with crap. And, I thought to myself, "Face it Charlene, you were an Oreo away from that scooter had you not turned to plants and turned away from the evil trifecta."

As I sped along the trail doing speed intervals, I thought about another lady at Target. I couldn't help but to become part of her conversation. She was holding up boxes of candy for her maybe two year old. She was asking him what he wanted, the M&M's or the Good&Plenty? He wanted a toy. She then held up Mike and Ike's and Peanut M&M's. He still wanted the toy. And slowly, I turned to say, "Maybe you need to take his lead. He's letting you know that the toy is a far better choice than the candy." I was ready to run for the hills, but she turned and said, "You know, I think you are right." Now if I only had the same courage to talk to the other lady in the scooter with all of her candy and cookies.

I realize that we do what we know. The candy and cookies lady probably only knows cookies and candy best. Target isn't known for its veggie selections, but they are taking a step in the right direction in providing fresh vegetables. In my head, I was wishing for a remote control device so I could steer scooter lady to the veggie aisle.

These plants...they give me great joy.
Posted by Unknown at 5:44 PM