Forks Over Knives...you must see this movie! 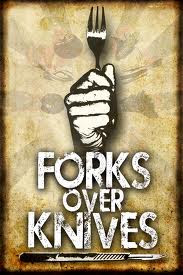 I was in New York this week for the NYC premiere of Forks Over Knives. My close friends know that I am a movie lover and that one of the things I would love to do is attend the Oscars. If that doesn't happen, going to the Tuesday premiere of the film at the Sunshine Theatre has certainly left me feeling as though I had attended the Oscars...

I was fortunate to meet Brian C. Wendel, the producer of the film. I would describe him as gentle, yet most powerful. A visionary. Very sincere. He was the kind of person who doesn't miss a beat. He takes it all in. And his film, will allow you to do the same, because there is so much to see and learn in this film. Yes, it is true, at this writing, I have seen this film eight times.

Anyway, here's something I wrote for the Forks Over Knives website. It really speaks from my heart. On a side note, I was watching TV this morning and taking in a news piece about Phoebe Snow, the singer, whose life was taken last week as a result of a stroke and cerebral hemorrhage. As I was taking in the points of her story, it struck me that we were the same age. I am convinced that the plants I eat keep me very healthy. Really, there is no better medicine than plants.

Read on. Go see the movie. It will change your life.

The Movie That Changed My Life
Charlene Nolan, Devon, PA

I love movies. I love their soundtracks. I love where movies take me during their running time. When Forks Over Knives began, I was hooked from the first frame of footage. As the film progressed, I became more and more drawn in to its message. I loved “meeting” each person profiled, and I gained from the steps that they took to embrace a plant-based lifestyle. When I saw the improvements of people like San’Dera Nation, a young woman profiled in the film, I looked to her as a role model. I actually cried hearing her profound message at the end of the movie.

The movie spoke to me that night. And the next night, when I could have gone square dancing, I went to see the movie again. In many ways, it was a different movie, because I saw things that I hadn’t focused in on the first night. As the movie continued, its message spoke profoundly to my heart. I wondered how I could help bring the message of the film to others. That’s when a went off. I thought, “Why not bring the film to my community, and let my shoppers (from Whole Foods Market) and their friends see the film?”

I called the producer, booked a theatre, and called my counterparts at area stores—and we were off with a plan! From a private meet and greet with Rip Esselstyn (author of “The Engine 2 Diet”), a plant-strong dinner, kale shakes and more than 450 attendees, I knew at that moment that Forks Over Knives packed a powerful punch . And from that one screening in Bryn Mawr, PA, a partnership was born. More than 17 other Whole Foods stores have since sponsored screenings of the film around the country.

The film’s message speaks to me every day as I interface with friends, shoppers, my family and even strangers. I credit the film for helping me lose more than 80 pounds, as well as improving my biometric readings. Yes, I did the work, but the film laid out a path for me to follow.

You owe it to yourself, your family and friends to go and see the film. Take someone who really needs to hear its message. Reach out to those who are driven by a medication-dependent life and let them see, first hand, that food can be thy medicine.